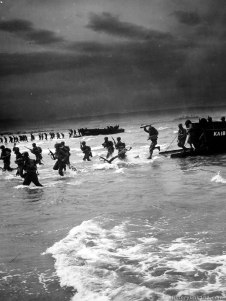 In the spirit of D-Day and our newly released Summer “D-Day” Issue, and also because he’s such a damn good writer, we’re publishing Doug Bond’s flash piece “FOLDED FLOWER.” Check it out. Check him out. And Check out the D-Day issue.

Up at my Grandma’s for the holiday break, she asked about my studies, other things, said she wondered what it was I had been busy scrawling away at. “Oh just a letter…to a friend.”

“Is that your girl. You still seeing that girl, the one from high school?”

I was surprised she remembered. I guess it was all pretty transparent.

She got up and told me to go on with what I was doing, went upstairs and returned holding a small dark wood box. She opened the clasp and leafed through some buttons and things and pulled out an old yellowed letter folded up in a square. Attached in the center were the petals of a small flower pressed in wax paper. Uncreased, she read it out loud:

Oh sweet Elipha I think of you dear

I yearn for your face in the light

An end to the darkness spreading the land

Your laughter with mirth and delight.

A catch came into her voice, and her eyes lowered with her hands. The silence felt strange, so I said I had no idea Grandpa was such a romantic old fool. “A poet no less!”

“Oh, no, goodness no, this was just a boy that loved me once.”

She folded it back into a square taking care with the brittle paper and dried flower. It was a poppy I found out later, a red one, she had picked years ago in a field when she was young.

One thought on “FOLDED FLOWER – By Doug Bond”